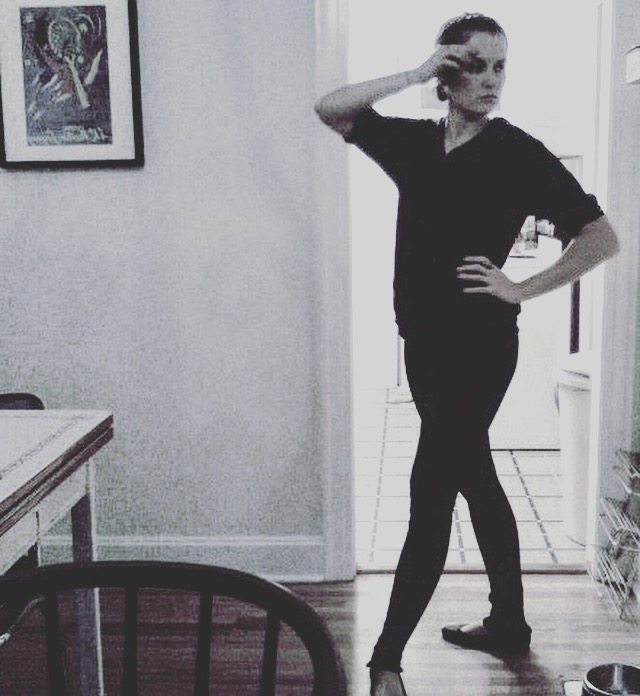 Yesterday just as I was about to leave work, something happened to upset me. I won’t go into detail since this is my public ballet blog. The main thing you need to know is that, leaving work, I was rattled, upset, worried and more than a little bit angry.

I didn’t want to go to ballet class. The last thing I wanted to do was go to a class to practice making my body light and ethereal, to be graceful, to perform slow, controlled movements or light, bouncing steps. What I wanted to do was go for a long, hard run. On the way home, I blasted T-Pain and Le Tigre (as you do) as loud as I could stand. I was feeling decidedly un-balletic.

But running would have been impractical, and it’s no longer really in line with my fitness goals, and it’s not like I could go to ballet class some other day, this is the last class of the week that works with my schedule! Also I felt like if I let this incident affect me so much that I miss something that has become so important to me, I’m like, letting them win, you know?

So I went. Taylor, the teacher on Wednesdays, was hanging out registration as she usually does. She said hi and asked me how it was going. “Good,” I said automatically, and then, “…it’s going!” Then we talked about the weather. I sort of wished I could blurt out what had happened earlier but obviously that would have been weird.

The women in class were being chatty when I walked in. But all they were talking about was local elementary schools. So I had nothing to say or contribute. They were also talking about the housing market and good neighborhoods to buy in, zoned for which schools, etc. Sigh. Maybe next time I should awkwardly yell, “MUST BE NICE TO HAVE KIDS AND A HOUSE” like an actual psychopath.

For some reason there were only five of us in the class. The Wednesday class is usually packed. Taylor said once the holidays start drawing near, attendance goes up and down wildly. At any rate, it was nice, but the drawback was that we could do most of the center combinations in one group. At first I was excited because I always feel self-conscious with other students watching, but then I realized that not taking turns meant not having a break! At certain points my muscles just flat out refused to do what my brain was telling them. I think some emotional exhaustion from the incident at work played a part as well.

I did not dance my best. My heart was not entirely in it. My mind was a scattered mess. But by the end of class I felt so much calmer. As anyone who has danced knows, during dance class there is so much to think about – from alignment to choreography to musicality to placement to tweaking the movement and arrangement of every single muscle, joint, and bone in your body, all while trying to make it look like you’re NOT doing any of the above or making any effort at all – that you are forced to enter essentially a meditative state where your mind is clear (of everything but ballet). Having a 1.5-hour break from thinking about the incident at work helped me get some perspective on it, as well as finally succeed in removing myself a bit emotionally. It was maybe even better than going for a long hard run, which probably would have psyched me up into even more of a fury (I like running when I’m angry because it makes me feel strong, like I can conquer the world).

I even got a sick satisfaction out of doing a bunch of barre combinations on releve, muscling myself up and feeling the burn lol. Taylor said “high demi-pointes!!” not a few times and I kept looking at my sad excuse for a demi-pointe in the mirror. I’m so determined to get it higher, but it’s discouraging to notice how far I have to go. At any rate, it felt good, it felt good to sweat and work and push and although I felt tired, I also felt strong.